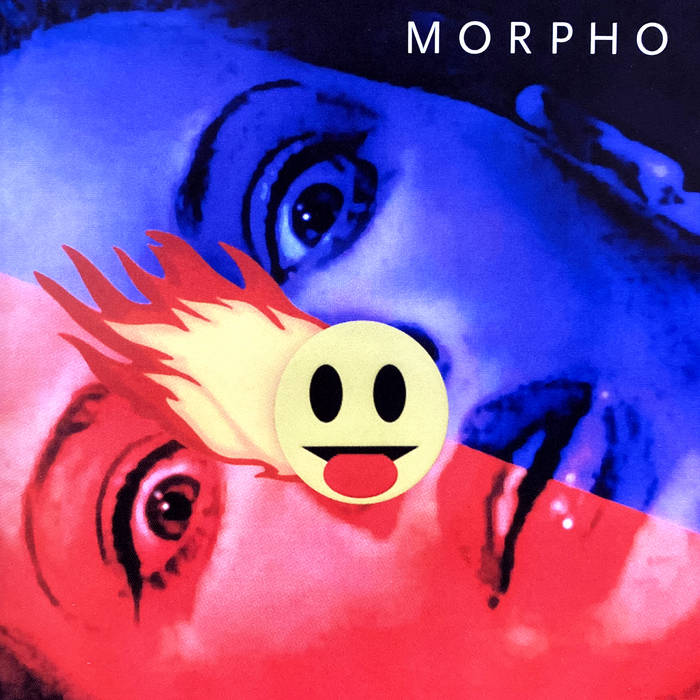 Andy Hamilton, The Wire
Morpho is a unique studio colloboration by two Melbourne artists. Improv guitarist Dave Brown is known for his work in avantjazz outfit Bucketrider, with contemporary Third-Streamers Pateras/ Baxter/Brown, and as solo laptop/prepared guitar project Candlesnuffer. David Wadelton is a cyber-surrealist pop-influenced painter whose work is found in the National Gallery Victoria and the Australian National Gallery Canberra. The pair were at art school together, and founded influential early 80s Melbourne post-punk band Signals. Wadelton then packed away his instruments, and Morpho marks his return to music after a 20 year hiatus.

The churning rhythmic exotica of "Listen Carefully" is set against a War Of The Worlds backdrop, while "Straight to Video" is bombastic Shaft territory. The synthy, formulaic fuzz of "She's Out, Bigman" features snippets of talk radio which as Wadelton explains were recorded off a New York AM show where people won prizes for physical stunts - one man stopped an electrical fan with his tongue, while the interjection "Wow - those babies are out" refers to a woman who played the piano with her breasts, allegedly. It's not all entirely tongue in cheek, or tongue in fan, though - there's blistering rock guitar by Brown especially on "Surf, Instrumentals and Exploitation". The result is a bizarrely magnificent celebration of kitsch cinema and its musical progeny - offkey and engaging.

Cine Rock:
An Embarrassment of Riches


“Man – I just flashed that chick Barbara.” So says Peter Fonda in Roger Corman’s THE TRIP (1967). Whether you’re six or sixty – whether it’s 1967 or 2067 – that scene, that line, that whole film is and always will be plain embarrassing. And that is its ‘universal’ charm. Like each and every instance of cinema trying to be groovy, it evidences the monumental gulf between rock and film. It’s a dimensional divide between the complex sonic corridors of rock’s near-century worth of soundings and carvings of guitar, neo-guitar and post-guitar auras, and cinema’s near-century worth of pretentious image-making and portentous story-telling.

Like fools searching for their gold, film writers, directors, producers and actors globally sidle up to rock. Like ugly Americans, sweaty Italians, weedy Brits and repressed Japanese, they blur into a horde of hearing-impaired internationalist businessmen trying to pick up chicks half their age at a bar somewhere in the hot spot of an urban underground. The sounds of movies from the 50, 60s and 70s document their failed lechering gloriously. Be it Alexander Courage thrilling us to nimble twanging for HOT ROD RUMBLE (1957), Les Baxter freaking us out with trippy bacchanals for WILD IN THE STREETS (1968), or Jerry Goldsmith fluffing up some bachelor pad muzak for ROLLERBALL (1976), the only sex stud machismo in these films comes from the musical equivalent of hairy backs, comb-overs and Fred Flinstone 5 0’Clock shadows. Maybe this is why Russ Meyer’s late 60s/early 70s films like GOOD MORNING AND GOODBYE (1967), FINDERS KEEPERS LOSERS WEEPERS (1969), CHERRY, HARRY & RAQUEL (1969) and THE SEVEN MINUTES (1971) look and sound better as time goes by: the ultra-vixens are matched to ultra-square scores and ultra-ugly men desperate to swing with the new sexual revolution.

THE TRIP (“Feel Purple! Taste Green!”) posits Peter Fonda as an advertising director ‘tuned in and turned on’ by Jack Nicholson who plugs him into LSD. The spectre of Roger Corman – a mannered non-Libertine figure of exploitation – hangs heavy over the film. Its disingenuine affectedness is a wonderful testament to the 60s as it slips down the plughole of a reality in which we still live. As then, nothing now is ‘cool’ despite the fact that even tricycles for kids are sold as being cool. The X-MEN movie (2000) positions itself to be for ‘8-9 yr old boys’ when in fact it’s for their 38-39 yr old dads whose wives think it’s ‘cool’ to wear black leather designer jackets. Cool in fact was never cool – no matter how many advertising executives think that the visual flair of David Fincher’s SE7EN (1995) is ‘edgey’. Cool is and was only ever camp. Which is why exploitation movies trying to be cool demonstrate the vacuousness of ‘being cool’. Similarly, great rock music is never cool: it’s always deluded, self-aggrandizing, embarrassing. So in a perverse fashion, the score to the trip (by the pompously named ‘The Electric Flag – An American Music Band’ featuring Mike Bloomfield) is – through and despite its artifice – great rock music.

Norman Herman’s TEENAGE REBELLION (1967) was marketed as “The truth about the ‘Now’ Generation – a documentary report”. Like, do I need to go on? That’s like a movie ad line telling me that Russell Crowe is a gladiator. The film is like a trip inside the mind of an advertising executive straight out of movies like THE TRIP, here trying to explain to a general audience ‘what’s going down’. Of course the movie was pure exploitation: a MONO CANE of sex, drugs and rock’n’roll. Sections of the film are actually lifted from obscure low budget European and Japanese teen dramas, here passed off as documentary footage to a xenophobic American audience. Best of all, the film is wall-to-wall with chunky gritty ‘rockzak’ courtesy of Mike Curb’s production and Davie Allen’s amazing fuzz-guitar. Parts of the score sound like an eerie forecast of Sonic Youth’s great grunge anthem, “Teenage Daydream”; parts of it sound like The Cramps at their most theatrical.

In John Boorman’s POINT BLANK (1971) there’s a bar scene. It’s like any bar scene from the era where a private detective (in this case, a real fucked-up Lee Marvin) goes to chase up a lead. There’s an unnamed band playing on a miniscule bar-stage: they’re black, all dressed like Black Panthers in skivvies (just like The Commodores on their best album MACHINE GUN, 1974). A bizarre ‘soulzak’ blares with the lead singer doing Wilson Pickett on some serious speed. And lined in front of him at the bar is a line of balding 40s-plus pudgey men in suits, actually grooving to the music. At this point – as with all movies from the expanded 50s-to-70s era trying to rock-out – the whole film melts into surrealism if you have the faintest sensitivity to rock, pop and recorded music. The scene is about as convincing as the live sets from LANCELOT LINK – SECRET CHIMP TV series (1971). And believe me, those chimps rock more convincingly than most Hollywood depictions of ‘rock performers’. Again, that fleeting scene in POINT BLANK is magic due to its utterly repellent inappropriateness.

Those who make mention of ‘the real’ in rock need to read less rhetoric from rock’s own self-validating history and watch more of these movies. It is through its glaring fakeness that rock shines brightest. The abject granularity of rock – its plastic energy, its glistening grime, its gorgeous destructiveness – is well preserved in the sonic amber of the film soundtracks from this embarrassing epoch. It’s a time where ‘getting it on’ was always about ‘getting it wrong’. And it’s an undying era. Today’s equivalent can be seen in the precum from record companies who sniff a distant frisson of an AC/DC lick played by a bunch of teen boys – preferably from a bogan country town. Sign ‘em up quick. I hope they have a cameo in a film I can enjoy ten years from now: their rock will be perfect for the scene.