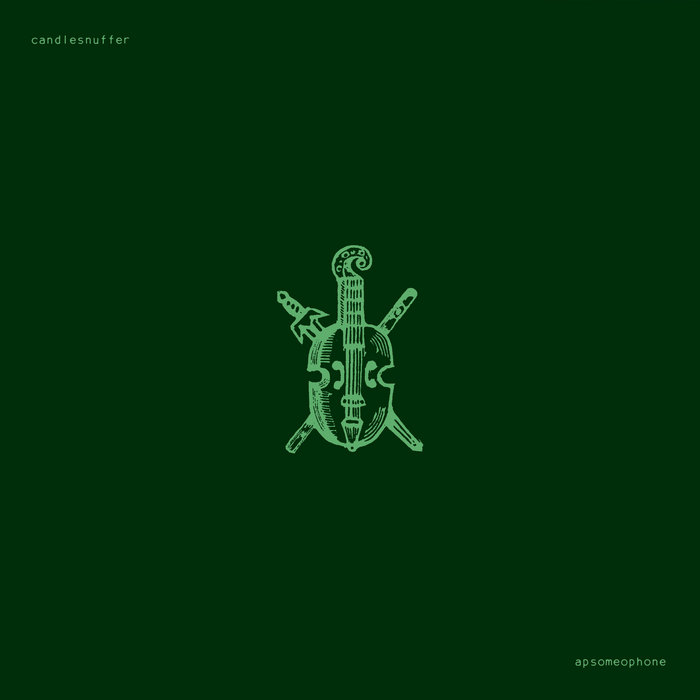 Vinyl purchasers will be emailed a download code for the simultaneous digital reissue on Room40.

A record of odes originally released on CD in 2005 by Lexicon Devil Records (lexdev017).

All the pieces on ‘apsomeophone’ began from a pressing need I felt to incrementally compose a group of compositions designed to provide me with an instant ensemble accompaniment for my improvised live performances. I started by borrowing isolated sounds or very short passages from compositions I loved, and subsequently I edited them further or processed these fragments to points beyond recognition, I then added elements of my own playing and bits of environmental recordings I had made.

In a sort of following my nose, or ear way, I began to cobble and form these sounds into groupings and further add to, subtract from and process these groupings until they started to develop some sort of formal drama. Throughout the gestation of the pieces on ‘apsomeophone’ I was immured in a world of fascination with the arbitrary conjunction of somewhat opposing elements, for example: Hi Art with Low Art, acoustic with electric, analogue with digital, abstract with formal, etc.

When the 'backing' compositions were complete I then performed live to their accompaniment, improvising, doing the prepared guitar on my lap thing and utilising an amount of stomp box processing as well. I subsequently made recordings of these overdubbed improvisations, now entwined with the original ensemble pieces, but in most instances felt underwhelmed by the results as stand alone recordings. So, another wave of editing began, the same processes of addition, subtraction and transformation followed through until the finished pieces felt right.

Title selection for the finished pieces mirrored the compositional process, in that I historically extract small phrases from literature and other sources that strike a chord with me at the moment of reading. These extractions are then selected and sometimes edited. Outside their original context they marry themselves to pieces of music. I guess in some way it's all a sort of current Surrealist procedure.

This follow-up to candlesnuffer's eponymous debut on Dr Jim Records is David Brown's finest work to date, a striking collection of compositions in which the Australian guitarist pays homage to the founding fathers of musique concrète (the album title is a reference to Pierre Henry's Apsome Studio). As Brown's frequent playing partner Anthony Pateras notes in the liners, the music references "everything from the GRM to Japanese folk to Bartók to devastating death rock [..] a visceral performance language that would make any supposed 'post' rocker shit their pants – and probably Boulez as well." In the bad old good old days of razor blades and Scotch tape, a piece like the opening "Were holes mended?" would have taken weeks, nay months, of painstaking work in the studio – which is not to imply that Brown threw it together in an afternoon. Far from it: even with today's state-of-the-art software there's an enormous amount of patient sequencing involved here, as samples of the music of Henry, Cage, Ligeti, Takemitsu and Bartók are reconfigured into startling and startlingly coherent compositions over which Brown layers his own distinctively spiky guitar improvisations. It's a shame in a way that he's released this under the candlesnuffer moniker (which those unfamiliar with the name could easily assume is some sort of Death Metal or grungy hardcore outfit – Brown is, for better or worse, perhaps best known as the bloke who started out as a member of AC/DC..), as it deserves to be just as widely circulated in the contemporary classical market served by labels such as Mode. Perhaps Pateras could put a good word in with John Zorn (Pateras's own Mutant Theatre after all came out on Tzadik) – Zorn maybe more than most could appreciate the brutal jump/cut aesthetic that Brown adopts here to such deadly effect. There are plenty of twists and turns in each of the eight tracks, and Brown's soundworld, with its Samurai shrieks (courtesy Kurosawa), vicious shards of guitar and skull-shattering percussion, is thrilling enough to keep you coming back again and again. – Dan Warburton/Paris Transatlantic.