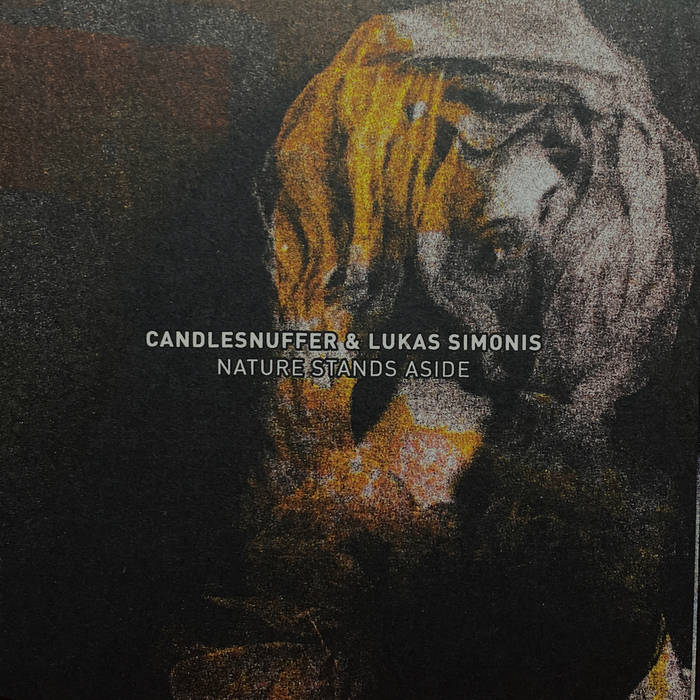 Ed Pinsent, The Sound Projector
The Dutch multi-media talent Lukas Simonis teamed up with Candlesnuffer in 2011, and they did tour for a time in the summer of last year. In October they also sent us a copy of Nature Stands Aside (HELLOS SQUARE RECORDINGS CUBE046 / Z6 RECORDS Z6009060300), where the two of them meld and clash their improvisational skills together, like two avant-garde hamburger chefs grinding the meat. Right from the opening few seconds, it's a very unnatural sound on the record, and it becomes even less familiar as we delve in. What's going on? Very few clues are provided in the cryptic press release, but based on a YouTube video rescued from the gigs, my guess is they might both be playing guitars; Candlesnuffer (i.e. Dave Brown) is an improviser from Melbourne who has played with Bucketrider, Western Gray, and as part of a trio with Pateras and Baxter, and he's certainly a six-string wielder of the first water. Nature Stands Aside contains a lively and abrasive assortment of non-musical, mostly acoustic, eruptions and creaky scrape-a-thons, episodes where the frenetic fondling and stroking actions of the stiff wooden necks occasionally resulting in harmonics and vibrations that might be mistaken for musical notes. There's also plenty of percussive and frottage effects that jangle your bones like loose change in the pocket, and odd whimpering and whining that might be generated from highly unconventional fingering and slide techniques. In all, a forward-looking collaboration that suggests strongly the makers are intent on expanding the vocabulary of the improvised guitar, even if it comes at the expense of ordinary listening pleasure. However, the project may have something even more radical behind it. "Doing 'abstract' stuff and actually 'improvising' (even worse!) means 'failing the best we can'," explains Lukas, enclosing many phrases in inverted commas to underscore his point, and sounding a tad fatalistic about the possibilities afforded by free music. It seems they revisited the recordings (made in 2010) after about a year and Lukas confesses "we were very fond of what we heard", before going on to make some references to natural anomalies and irregularities that remain obscure for me. I suspect this album will remain indigestible in places, but my advice to you is keep on chewing and see. The sleeve is a frieze of blurry quasi-Gothic images by Adam J Bragg which at first made me feel we should be getting a record of mysterious dark droning. How wrong I was.

What is a monster? In a musical context…. it's either the most horrible noise you can experience or, is it a new version of “4.33”? But horrible noise can be turned down, and “4.33” is very bearable if you've got a good book (or “40.33” for that matter). Then there is 'Neoliberalism', it's supposed to be the natural order of things. Just ask Ayn Rand (if she were still alive) and her 'objectivism'. There's so much information in the world that tells us we're mistaken, we're failing miserably, we're doing the wrong thing because it's not 'natural', 'objective' or 'logical' (all of these?). And the main point of this indoctrination; the 5 billion people that never listen to anything, who are slightly out of touch with day-to-day reality, they must be right (they’re in democratic heaven, together with all those Elvis fans).

The ideas and concepts of the CD, ‘Nature Stands Aside’ are partly inspired by Rosamund Purcell’s study 'Special Cases'. Doing 'abstract' stuff and actually 'improvising' (even worse!) means 'failing the best we can'.

For some strange reason we revisited the recordings a year after they were conceived and we were very fond of what we heard. And also we saw, in reading Purcell's study of natural anomalies, obvious similarities that reflected ‘irregularities’ inherent in our sounds. Maybe nature is a subjective subject after all?

‘Nature Stands Aside’ shows us that too loud, too soft, no rhythms, no melodious structures, sounds in the wrong place, cracks in the right place, are concepts that have more to do with our fears & sentiments than with reality. In other words; if we finally flush the obsolete concept of Darwinism & all who sail with that, we might find that ,after the decline of Capitalist 'Civilization', people start being curious 'again' and give the stuff that doesn't fit into their daily routine a chance. (don't count on it mate).
Lukas Simonis.